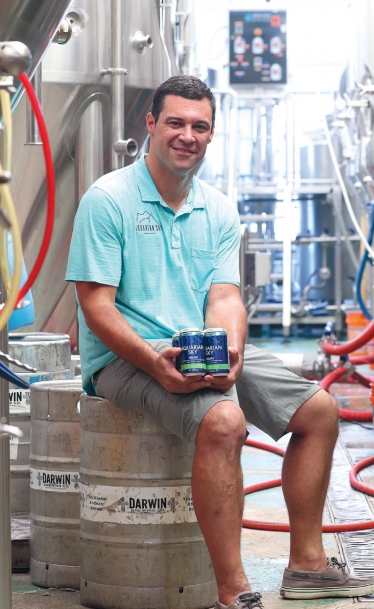 Ed Chiles has a well-established reputation as an arbiter of taste with a nose for excellence, and the latest venture to be added to his venerable portfolio features another pillar of the Sarasota food and beverage community: Matt Cornelius, formerly of Darwin Brewing Company and Taproom. I say “formerly” but Matt is still a fixture and a consultant at DBC—in fact, it’s at the Darwin Brewery Taproom in Bradenton where I meet Matt early on a Tuesday morning to discuss the business that has captured and inspired his imagination and passion to the point that he dedicates himself to it exclusively.

Aquarian Sky Sparkling CBD Water is a sparkling water infused with hemp extract. It contains a formula of 20mg of CBD developed by Tanasi, which Matt says is the first patent-pending medically researched university-developed hemp-extracted Cannabinoid formula on the market. This beverage is vegan, zero-calorie, zero-sugar, gluten-free, and fresh from Florida: These are a few of our favorite things! The beverage is touted as “Hydration with a boost” and the artfully designed can features the Aquarius constellation, which is said to resemble a person carrying a bucket of water.

Jeff Heeren is the CEO of Tanasi and he had this to say of the formula, “We are very simple in our message: The Tanasi formula is based on university research. It was Middle Tennessee State University (MTSU) who filed the patent, and Tanasi holds a worldwide exclusive right to bring this formula to market.” The formula is patent pending because it is unique and new. So who’s behind the $2.5 million grant on hemp research at Middle Tennessee State University? That would be Greenway Herbal Products, founded by Ted LaRoche and, you guessed it, Ed Chiles.

Matt Cornelius talks about the benefits of his product with sincerity and passion. He doesn’t do anything halfway and he doesn’t endorse anything that he doesn’t believe in. Matt says that CBDa/ CBD can help with chronic pain. It’s a natural anti-inflammatory, and it accelerates regeneration of skin cells. Matt drinks Aquarian Sky every day and he says that he no longer needs a midafternoon nap, nor does he experience the crash that one associates with energy drinks.

I’m on Day 4 of drinking Aquarian Sky as this goes to print, and I’m a convert. It tastes far better than other sparkling water beverages (so far Grapefruit and Mojito are my favorite flavors), and I can report a feeling of well-being and calm that could be entirely placebo but it’s refreshing enough that I’m excited to continue my personal research. Matt says that the product is so pure you can drink a lot more of it than other, more artificial, sparkling water beverages.

Register for our Weekly Newsletter

see all
Article from Edible Sarasota at https://ediblesarasota.ediblecommunities.com/about-us/aquarian-sky-cbd-water

Local, Fresh & In Your Inbox

Get seasonal recipes and local stories every week