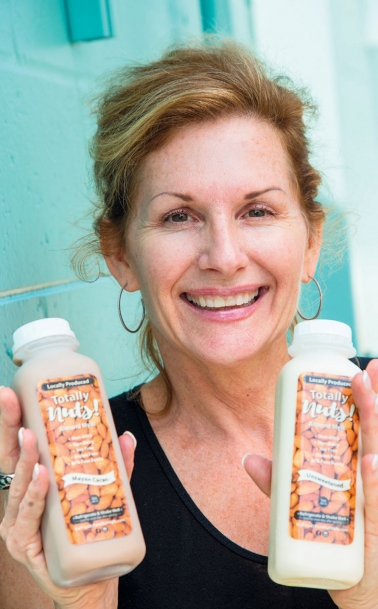 Vicki Cleaves-Gregory, owner with her Mayan Cacao and unsweetened flavors.

Every now and then, something happens in the universe where a person is picked to fulfill a mission that is greater than themselves. Some people battle injustice towards refugees, others battle ignorance towards the LGBT community. Vicki Cleaves-Gregory is a revolutionary foodie, battling the invisible war of the American diet.

Gregory had been working as a pharmacist at Walmart for a number of years. A scientist by nature as well as by profession, she researched the multi-decade decline of cow’s milk and the subsequent rise of alternative milks, sometimes spelled “mylk” to distinguish them from the dairy product. She found that the most popular almond mylks contain 98 percent chemicals and water, 2 percent or less of almonds, and a ton of gels, gums, and thickeners.

Wanting a healthier life for her family, she began to make her own almond mylk in 2007, selling it to friends and neighbors. She conducted research to find the source of her own families allergies, which all led back to the food they were consuming. She found that processed foods contain a lot of questionable additives. “I felt like this was a public health problem,” she says.

In 2016, Gregory reached out to the U.S. Food and Drug Administration (FDA) to fine-tune her almond mylk. Together, they boosted the shelf life from nine days to 35 days, still maintaining the integrity of the clean ingredients. By 2018, patented and ready to sell, Totally Nuts! was available to the public. Locally, her mylk is used at Simon’s Coffee House and at Lelu Coffee. “Those two businesses… took a risk with me and trusted me and the products,” she says. She is now selling Totally Nuts! in 10 Lucky’s Market stores (and counting) across Florida.

So far, she has three flavors: Unsweetened, Mayan Cacao, and Cafe Au Lait. What’s in it, exactly? Filtered water. California almonds. Pink Himalayan sea salt. No preservatives. Gregory uses local Old Florida Honey in the Mayan Cacao, and Lelu Coffee’s cold brew in the Cafe Au Lait. Nutritional facts? Each cup of her unsweetened mylk contains 24 almonds, 6 grams of protein, 1 gram of sugar, no cholesterol, and even an added probiotic.

Cacao comes from Central and South America, where it has been taken ceremonially as a heart-opening element for eons. As Gregory told her winding tale of investigation, I sampled the Mayan Cacao, my favorite flavor. Holding a beverage that had so much time, investigation, and sincerity behind it, I couldn’t help but feel at peace. Totally Nuts! When calamity strikes, peace prevails. And so does almond mylk.

Register for our Weekly Newsletter

see all
Article from Edible Sarasota at https://ediblesarasota.ediblecommunities.com/about-us/totally-nuts

Local, Fresh & In Your Inbox

Get seasonal recipes and local stories every week